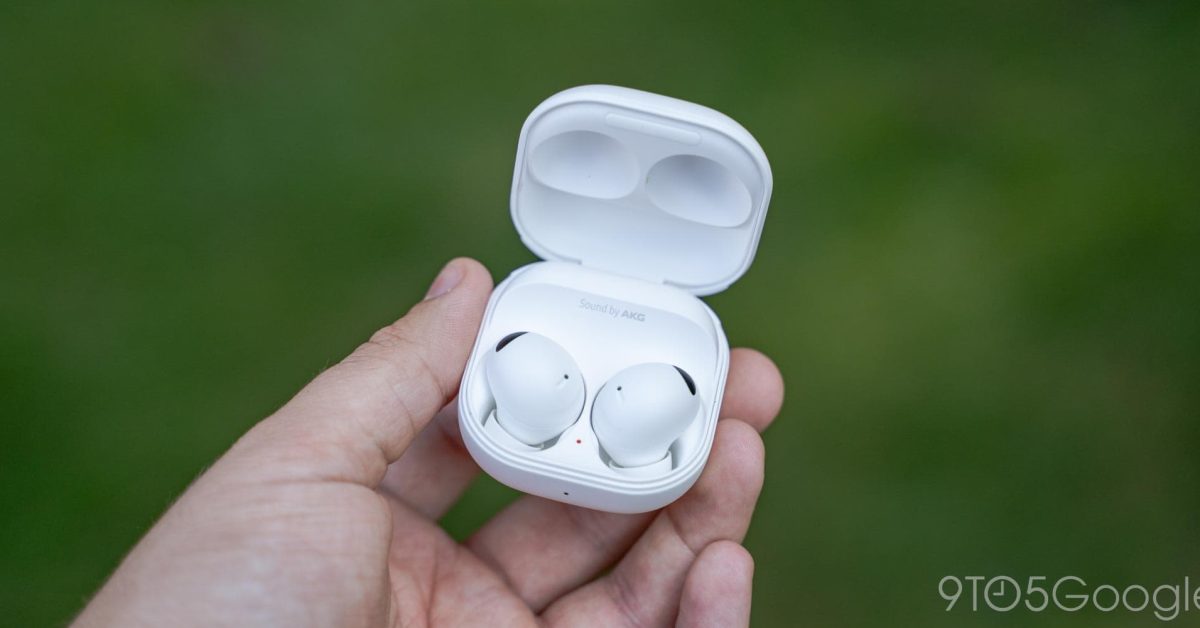 Earbuds have become a dime a dozen in today’s market, and there are some really good options for not much money. So why should anyone even consider spending $230 on Samsung’s Galaxy Buds 2 Pro? Let’s take a look.

In the hardware department, Samsung’s latest earbuds are pretty darn similar to its past few generations. It’s using a matte version of the same rounded square case that the Galaxy Buds Live, Buds Pro, and Buds 2 have all used. And just like on those models, it’s a great case! It’s compact and easy to fit in your pocket, has a lid that’s solid and easy to open, and magnets that make charging alignment a breeze.

The bigger changes, rather, are in the earbuds themselves.

The Galaxy Buds Pro these replace were notorious for issues with comfort. In our review, we said the comfort was an improvement over the Galaxy Buds+, but that didn’t really last. In the 18 months since, the Galaxy Buds Pro have rarely been my earbuds of choice because, frankly, I couldn’t wear them very long without ear strain.

Galaxy Buds 2 Pro definitely address this complaint, with a new earbud shape and contour to the earbud that fits much better in the ear. I can’t say these are the most comfortable earbuds on the market, but I can wear these for a couple of hours before feeling any real discomfort. Pixel Buds Pro and the standard Galaxy Buds 2 are a far better fit in my ears, with the former being my gold standard for earbud comfort right now.

When it comes to actually staying in my ears, these also passed with flying colors. During a round of disc golf, which requires some quick head movements, the Buds 2 Pro didn’t budge at all.

24-bit is overhyped, but they do sound great

Samsung is advertising the Galaxy Buds 2 Pro as the first earbuds to support 24-bit audio, providing a “studio worthy,” “ultimate Hi-Fi sound” experience for users. In practice, that feels very exaggerated to my ears.

The Galaxy Buds 2 Pro sound great, don’t get me wrong, but they’re not that much better than most other earbuds at this price point. You might pick up on some background sounds that other earbuds couldn’t accurately replicate. Listening to “If It All Goes South” by Sammy Rae & The Friends through Spotify on its highest quality settings (320 kbps), I definitely picked up on some background sounds better than through my Pixel Buds Pro. “Come to Your Senses” from Tick Tick Boom has been my go-to test this year for earbuds, and Galaxy Buds 2 Pro definitely pass with relative ease. I felt the highest notes were approaching “shrieky” territory, but it was still a pleasure to listen to overall – one of the better models I’ve tested so far this year.

24-bit audio isn’t a complete gimmick, but it’s something that’s lost on most people. Unless you’ve curated a collection of local music files, you probably won’t be able to appreciate the boost these earbuds are capable of delivering. Even using Tidal, the difference in quality between it and Spotify on the Buds 2 Pro is minor, with Tidal just offering a little more depth to the sound.

As usual with Samsung’s earbuds, it did take switching the EQ settings to the “Dynamic” preset to get the best balance out of the sound. Dynamic provides more depth to the audio, where “Standard” is a bit too flat, and “Bass boost” is too heavy on the lows.

The biggest problem I have with the sound quality is that it only works in one place – with a Samsung device. If you carry a Galaxy Z Fold 4, an S22, or even a Galaxy A-series device, you’ll get the best out of these earbuds, but you won’t get that same level of quality anywhere else. Samsung’s proprietary codec only works when Samsung’s earbuds are paired to Samsung’s phones and tablets.

And to some extent, that’s fine, but it also means that absolutely no one should be buying these if they own a Google Pixel smartphone, a OnePlus device, or literally any other smartphone. Get Pixel Buds Pro. Get Sony LinkBuds S. By all means, get literally anything else, because your $230 will be wasted on the Galaxy Buds 2 Pro if you plan on using them without a Galaxy device.

Latency has proved excellent on the whole, both when paired to a Samsung device and not. I tested the Buds 2 Pro paired to a Steam Deck, and latency was really not an issue while playing Spider-Man Remastered. Even during dialogue scenes, the sound was in sync. Obviously, the situation is even better on Samsung’s own devices.

ANC gets the job done

Active Noise Cancellation on earbuds is never going to be as good as it is in a pair of over-ear headphones, but it’s something that can really come in handy in many cases.

The Galaxy Buds 2 Pro are fine in this regard, but they aren’t exactly winning any awards. ANC couldn’t keep up with drowning out my electric lawnmower, something that many other earbuds have had less trouble with. On the other hand, though, ANC did save my sanity on a trip to the car dealership, where a one-hour wait in a room with an incredibly obnoxious HVAC unit would have been infuriating without the earbuds.

Transparency mode also works quite well, with a long-press on your earbud switching modes, and piping audio from the world around you through the microphone when transparency is activated. It’s not as natural as some other earbuds I’ve tested, like Google’s latest, but it’s also not off-putting. I still love too that Samsung automatically activates this mode and pauses your music when it detects you having a conversation.

Both modes also held up well in some minor tests with the wind. Transparency took a moment to adjust to block out the breeze, but ultimately it worked out just fine.

Not to beat around the bush, battery life on Galaxy Buds 2 Pro is perfectly acceptable. Samsung quotes five hours out of the earbuds themselves while using ANC or Ambient modes, and I found that to be completely accurate in my testing.

Great if you have a Samsung phone

Samsung’s Galaxy Buds 2 Pro work best with a Samsung phone, not just for the scalable codec but also for the software integration.

“Easy Pair” will detect the earbuds nearby and automatically pop up a pairing dialog on your phone or tablet. A Samsung account also allows the earbuds to pair to your phone and tablet at the same time and switch intelligently between the two, but only if they’re both Galaxy devices. That also works with Samsung TVs now. SmartThings Find can also locate lost earbuds with ease.

It’s all pretty great, but it breaks if you happen to use a Pixel, Motorola smartphone, or literally anything else. These features are built on the back of Samsung’s ecosystem, and it’s unfortunate that they can’t be used anywhere else. Especially when, really, Samsung isn’t doing anything Google isn’t. Fast Pair is available on many earbuds and works with every Android phone – and it now offers support for switching intelligently too. Earbuds with Fast Pair also support “Find My” integration too. Samsung is Android’s current leader by volume, but that’s not an excuse to ignore choice, which is what makes Android great in the first place.

But at the same time, it’s hard to ignore the little bits and pieces of Samsung’s software that can only happen with this in mind. If you have a Galaxy Watch, you can control ANC settings from your wrist. The same goes for the outer display on the Galaxy Z Flip 4.

The Galaxy Wearable app is what facilitates all of this, with options for an equalizer, to read notifications aloud, and to access Bixby too.

Useful gestures that still trigger anytime you adjust the fit

Samsung’s Galaxy Buds 2 Pro feature a touchpad on either earbud. A tap pauses or plays music and a long-press switches ANC/ambient modes. That’s how it’s set out of the box, but there are more options. You can double tap or triple tap to switch tracks back and forth. The long-press gesture can also be customized to activate Bixby, change the volume level, or trigger Spotify playback too.

These gestures are pretty standard, and they work well. But my problem is the same as with most earbuds. You can’t adjust the earbud’s fit without accidentally triggering the gestures. Only Sony’s LinkBuds have really addressed this problem, but the sensitivity of Samsung’s touchpads makes this especially useful.

Don’t buy into the hype, but do pick up these excellent earbuds

Samsung’s Galaxy Buds 2 Pro are just like any other pair of expensive earbuds sold over the past few years. They sound good, they nail the core feature set, and they integrate well with their company’s smartphones.

But as mentioned at the outset, you can get solid sound quality and great features from earbuds a lot more affordable than this. So why fork over $230 for Samsung’s own option? In my opinion, it comes down to a couple of things. If you have a Samsung smartphone, you simply won’t find better integration or sound quality to use with your device, at least at this price point.

The other is that Samsung offers some excellent deals. For instance, Samsung.com is offering up to $75 if you trade in an older pair of earbuds to go toward these. If you have 2021’s Buds Pro, or even the aging Galaxy Buds+ from 2020, you’re looking at a hefty discount. And you can trade in any “wireless audio headset,” including Apple’s AirPods, for $50 off as well. At $150–175, these are a much better value and make for an excellent upgrade. Plus, if Samsung’s usual pattern holds true, that will be the going retail price in a matter of months.

Where to buy Galaxy Buds 2 Pro

x Angela Lang / CNET The next Apple Watch (probably a Series 6) is still months from its big debut besides the rumor iPhone 12, 12 Pro and 12 Pro max. But there is still a lot of speculation about a Series 6 smartwatch that could stop us in the meantime. We’ve put together a…

x Hamilton Porter cools with buds. 20th Century Fox Welcome back to your guide to find out what’s new online. Every week we put together a podcast that tells you what has been added to services like Netflix, Hulu, and HBO Now. The sound is about a minute or two long. Disney Plus has just…

x Protesters gather in Manhattan in early June. Getty Images As protesters worldwide call for racial justice after George Floyd’s death, some have tried to better understand the concept of the “white ally”. What is an ally? Some people prefer terms such as “accomplice” or “co-conspirator”, but the basic concept is to raise awareness about…

x Google may not bring its employees back to the office until September. Claudia Cruz / CNET For the latest news and information about the coronavirus pandemic, visit the WHO website. Google appears to be delaying the reopening of its US offices after Coronavirus cases increased in several states. CEO Sundar Pichai previously said the…

x The Comet C / 2020 F8 SWAN was captured by the Australian Siding Spring telescope. Esposito Raffaele / Telescopic Siding Spring / Spaceweather.com The comet Swan has already passed Earth, but its journey towards the sun could make it more spectacular. It is the latest comet to tease Skywatcher with its gorgeous tail, which…