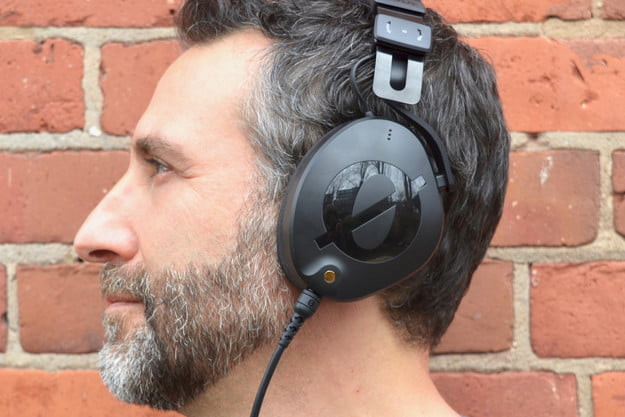 “Those who need a tool for critical listening have a comfy, capable new option in the Rode NTH-100 headphones.”

Rode — the Australian company beloved by YouTubers, podcasters, and other makers for its versatile family of high-performance microphones — has made the jump to the other side of the audio chain with its first headphones, the $149 Rode NTH-100.

Their price and intended audience (pro and amateur content creators) puts them squarely in competition with Audio-Technica’s $149 ATH-M50xa set of closed-back over-ear studio monitors with an almost cultlike devotion. The NTH-100 step into the ring with a thoroughly modern design and advanced materials, but is that enough to persuade prospective buyers to take the (ahem) Rode less traveled? Let’s check them out.

From their asymmetrical, triangular earcups, to their single-sided forks and signature Rode gold dot accents, the NTH-100 are both elegant and eye-catching. Instead of the usual leather or protein leather used by most studio cans, Rode has made extensive use of breathable, suede-like Alcantra fabric to wrap both the headband and the ear cushions.

They don’t fold, and the earcup pivots can’t rotate a full 90-degrees to lie flat.

Inside the generously padded ear cushions is a memory foam that incorporates CoolTech, a Rode-created gel that the company says will keep your ears from heating up the way they might when using other headphones. Rode says they’re easily and quickly swappable should you need to replace them. But the most interesting feature is Rode’s FitLok size adjustment system. Most headbands use index sizing — small notches that let you increase or decrease the size of the headphones in small increments. But this approach can sometimes lead to a Goldilocks problem: A bit too big, or a bit too small, but never quite right.

FitLok’s rotating, locking cams let you adjust the spring steel headband to exactly the length you want and then lock that size in place.

In another nod to getting the headphones set up just the way you want them, Rode has installed locking headphone cable inputs on both earcups, a feature that tends to only show up on much more expensive headphones like the V-Moda M200.

There’s just one problem with Rode’s approach to the NTH-100. They don’t fold and the earcup pivots can’t rotate a full 90-degrees to lie flat. This makes portability more difficult as they’ll take up a lot of space in a bag, and it hinders anyone who wants to monitor audio via one ear — DJs being the obvious example.

You might also find that glossy, debossed Rode “Ø’” logos on the earcup surfaces are easily scratched, so be sure to keep them protected when packing them.

Rode includes a single, 7.8-foot cable — ideal for studios, but maybe not so much for other uses. There’s also a protective but very thin synthetic bag, a 3.5mm to quarter-inch adapter, and some colored plastic rings to help with cable identification.

Though I didn’t subject the NTH-100 to any durability tests, Rode claims it has engineered these headphones to withstand quite a bit of punishment: The wires that connect the earcups to one another via the headband can handle up to 55 pounds of force. The locking audio cable uses a slightly softer plastic for its connector than the input jacks on the earcups. Rode claims that should the cable be yanked with sufficient force, it’s the connector, not the jack that will fail first, which is preferable to the alternative.

They envelop your head in a big, comfortable hug.

But more weight doesn’t always mean less comfort. I’ve been pleasantly surprised by just how comfy Apple’s AirPods Max feel when they’re on my head, and they weigh a whopping 13.6 ounces. The same is mostly true for the NTH-100. They envelop your head in a big, comfortable hug that minimizes much of their weight.

Those Alcantra-wrapped ear cushions feel amazing against your ears and head, and their relatively deep sides provide an airy, roomy pocket for ears of any size. Those deep cushions also provide a forgiving fit for people who wear glasses. There’s more than enough swivel and pivot play in the hinge components to get the earcups to lie flush against your head. All things considered, they remind me of the plush fit of the open-back Sennheiser HD560San incredibly comfortable set of cans.

The CoolTech gel isn’t a gimmick. Well into my second hour of wearing the NTH-100, my ears felt cooler and more comfortable than any other closed-back headphones in my collection. The FitLok mechanisms work well, and have no problem keeping the headband size where you need it, though dialing in that adjustment can be a bit fiddly when the cans are on your head.

They deliver a lively and energetic performance that also possesses a natural warmth.

But despite these excellent design choices, two things prevent the NTH-100 from being perfect in the fit department. The first is Rode’s selection of a relatively narrow headband. All of the studio cans it competes with (including the ATH-m50x and DT 770 PRO) have headbands that are 1.5 inches at their widest points. The AirPods Max is closer to 2 inches. But the NTH-100 are a mere 1 inch wide. That means they offer 33% less surface area for distributing up to 20% more weight. Clamping force and ear cushion design can offset this discrepancy to a degree, but you do eventually become aware of that ridge on top of your head.

Second, most of the NTH-100’s mass is located in the earcups. And because the earcups are so generously padded, that mass sits further away from your head. This increases the perception of weight, especially when you move your head and the earcups shift a little in response. It’s not a deal-breaker, but the ATH-M50x’s wider headband and lower-mass earcups create less fatigue over time.

The Rode NTH-100 are impressively clear and balanced, letting you hear all of the subtle nuances in your preferred audio, whether it’s music, voice, or games. Some studio monitors, which strive for a neutral or flat frequency response, end up creating a sound profile that can be cold, or clinical. Not so with the NTH-100, which deliver a lively and energetic performance that also possesses a natural warmth.

Bass is punchy but never overpowering, and there’s plenty of midrange detail. A track like Lorde’s Solar Power is an excellent showcase for the headphones’ ability to reproduce the resonant thrumming of an acoustic guitar, while simultaneously letting the vocals soar free, with crystal clarity. Credit must be given to Rode’s tuning of the 40 millimeter dynamic drivers, but the unsung hero is the NTH-100’s excellent passive noise isolation, which keeps external sounds mostly at bay.

The soundstage is wide, but not panoramic, and within its spread, instruments and vocals enjoy precision placement, without any smearing of locations. Changes in volume are handled with smooth proportions, and if there’s any distortion, it must only show up at volumes that are well beyond my ability to endure without inducing pain.

I think most pros and enthusiasts alike will take joy in listening to the NTH-100’s performance, but it’s worth pointing out that the Audio-Technica ATH-M50x still have an edge. For as clear and precise as the NTH-100 are, the M50x are even clearer, with a laser-like precision.

Does that make the M50x better? Well, it depends on your tastes. Along with that extra clarity, the Audio-Technica can come across as a bit cold. For critical audio monitoring, they’re very hard to beat, but that precision can also become a tad tiring. With their warmer tone and slightly softer edges, the NTH-100 let you listen for longer — that makes them more enjoyable for times when you simply want to get lost in your favorite music, instead of performing a forensic analysis.

Rode’s first headphones are sleek, plush and comfortable, and possess an excellent level of audio quality for pros and enthusiasts alike. They’re a bit heavy though, and a lack of fully articulated hinges makes them a tough sell for regular travelers or those who need single-earcup use.

For the price, I think the Audio-Technica ATH-M50x are still the cans to beat. They fold, they can be used to monitor with a single ear, and they weigh less too. They also come with three different lengths and styles of locking cable, making them more versatile. The M50x do lack the NTH-100’s modern styling and deeply plush cushioning.

How long will they last?

The Rode NTH-100 appear to be extremely well-built from top-quality materials. The locking design of the cables should keep the headphone inputs from being damaged, but even if that happens, you’ve got two inputs you can work with. Rode backs them with a two-year factory warranty.

Should you buy them?

Yes. As long as you don’t mind the absence of folding hinges, or the ability to swivel the earcups 90 degrees, the NTH-100 will be very capable audio companions whether you’re a maker, or just someone who wants to enjoy what others have made.

Pixel 6a challenges Samsung for the default Android crown