We’ve seen a trend over the past few years for smartphone manufacturers to put measly, all but useless 2-megapixel cameras on the back of their phones. One of the most popular additions in this regard is the 2MP macro camera that allows users to take close-up photos of various subjects and objects.

Now Xiaomi’s global vice president Manu Kumar Jain has confirmed on Twitter that the Redmi Note 10 series will have an updated macro camera system. In particular, the series will be equipped with a 5 megapixel telephoto macro camera, known as the “5 megapixel super macro” system. Check out the tweet below. 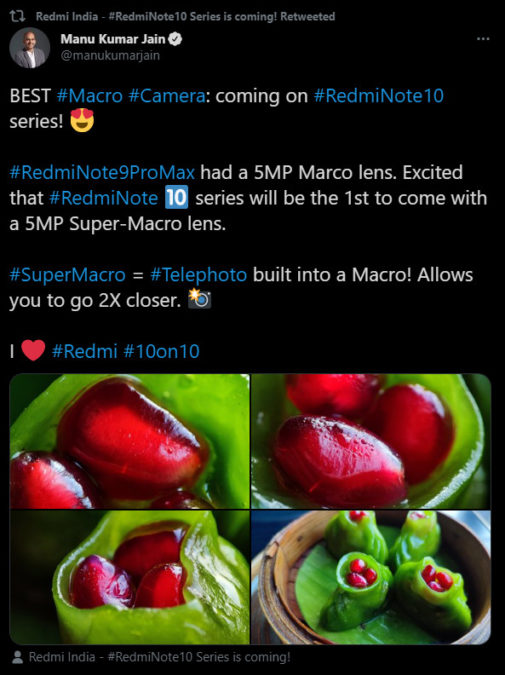 We’re excited to see a 5-megapixel macro lens here which, along with Samsung, brings a significant increase in resolution compared to the 2-megapixel macro cameras seen on typical budget phones. However, this is only part of the reason why we expect good macro photography from the Redmi Note 10 family.

A telephoto macro camera allows you to take a closer macro shot without physically moving closer, much like a telephoto camera allows you to take closer shots without getting closer to the subject. In fact, we first saw this type of camera on the Poco F2 Pro and were very impressed with the results of this lens compared to traditional 2MP macro shooters. In the case of the Redmi Note 10 series, Jain promises the possibility of getting 2x closer to the object than with conventional macro cameras.

Connected: The Poco F2 Pro shows how macro cameras should be made

There is no word on whether every device in the Redmi Note 10 series will be equipped with a 5 megapixel telephoto macro camera. However, we assume that the Pro device has at least this option. In any case, we are pleased that some manufacturers see the macro sensor not just as a means of increasing the number of cameras.

Are you using your smartphone’s macro camera? Let us know by taking the survey below.