Most small and medium enterprises (SMEs) in supply chains across different sectors in Africa execute orders in days but receive invoices after several weeks and sometimes months. It’s such an inefficient way of doing business that ultimately leads to cash-flow problems — and on top of that are fragmented payment collection and tracking processes.

Recently, startups have taken a top-down approach by singling out a particular sector and delivering solutions to SMEs within it. One such startup is Pivo, which helps freight carriers get paid faster by providing a bank account, a debit card and digital invoicing tools that track payments.

The startup, founded by Nkiru Amadi-Emina and Ijeoma Akwiwu in July 2021, is announcing today that it has closed a $2 million seed round. Pivo, in a statement, said it intends to use the financing to upgrade existing products, build new ones, hire talent and expand outside of Lagos, its first market and other African countries, particularly in East Africa.

In 2017, Amadi-Emina launched an on-demand delivery platform targeted at e-commerce brands in North and Central Africa, which subsequently got acquired by Kobo360, one of Africa’s most prominent e-logistics players. It was during her time at Kobo360 — first as an enterprise account manager and up until she left as head of port operations — that she witnessed the glaring liquidity problems that existed at both ends of the logistics supply chain. Truckers need cash advances from logistics companies such as Kobo360, Lori Systems and MVX to move cargo; meanwhile, these companies also require manufacturers to pay on time for distributing cargo to truckers.

“In most cases, we found out that managing cash flow was the primary issue for these businesses — it was either nonexistent or just paper-based,” Amadi-Emina told ProWellTech in an interview. “A lot of the payments made were made with cash and we thought to build a digital bank that provides financial services geared towards solving these various problems for SME vendors that operate within large manufacturing supply chains, starting first and foremost with the logistics providers, and then gradually moving to the supplier pockets and at the tail end of things.”

Pivo leverages manufacturing supply chain relationships and deploys financial services to the SMEs within them, mostly truckers in this instance. The credit play of its platform, Pivo Capital, serves as an early payment alternative for truckers and allows logistics companies to deal with any upfront costs — such as diesel and driver’s allowance — typically incurred during operations. Pivo Business, its payments reconciliation arm, helps these small businesses to facilitate payments via peer-to-peer transfers and track payments with debit cards with spend controls. Amadi-Emina explained that all these features will drive Pivo to capture a sizable portion of a $4 billion addressable market opportunity.

It’s a huge market where Pivo has the first-mover advantage. And though it doesn’t seem to have any noteworthy challengers in the freight sector, startups such as Duplo, another YC alum, whose customers are SMEs in the fast-moving consumer goods (FMCG) space, pose serious competition in the long run when the platforms seek out other sectors to replicate growth. That said, within its sector, there’s also some concern that e-logistics companies can construct a similar platform in-house (case in point, Kobo360’s Payfasta).

“As a plug-and-play and embedded solution, we’ve always been more complimentary than competitive,” the chief executive told ProWellTech when questioned about Pivo’s chances if e-logistics firms launch a competing product. “If you look at e-logistics firms, the goal for them is to move towards a platform approach and if at any point in time they want to unlock financial services, we tell them to come to PIVO for that instead of going to the traditional banks.” 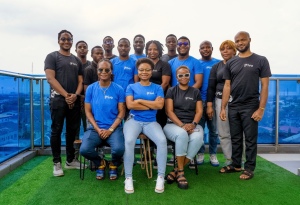 The freight carrier–focused digital bank currently serves about 500 SMEs as direct customers and makes revenue by charging interest on capital and fees on payments processed. Amadi-Emina said Pivo Capital has disbursed over $3 million to SMEs and currently records a 98% repayment rate while transaction volume on Pivo Business grew over 400% between April and September this year. The startup has registered a total volume of $4.7 million from July to date.

What’s next for the female-led startup? More growth, according to its CEO. The company is working on Pivo+, a package of value-added services that will turn Pivo into a full-fledged financial services platform. Daniel Block, an investment principal at Mercy Corps, one of the investors in this round, thinks Pivo is designed to become such a platform because the startup’s “commitment to unattended supply chain SMEs would enable it to rapidly carve out a deep moat in the competitive fintech lending space.”

Other investors in the seed round include Precursor Ventures, Vested World, FoundersX, and Y Combinator, where Amadi-Emina and Ijeoma Akwiwu have accomplished an impressive feat of being the first all-female founded team the famed accelerator has backed in Nigeria — and the second in Africa after the defunct Ghanaian startup Tress.

“It is a great thing that we were able to break that barrier as a female-led start-up. Getting into YC gave us validation as founders and cemented the fact that women can be at the helm of affairs in the tech space,” said Amadi-Emina of the achievement. “Tech is a male-dominated space and all these man-made barriers exist that serve to keep women out. Getting into YC, with the news amplified not just locally but internationally means more people get to see strong female representation coming from Nigeria. We’re glad that a female founder somewhere looks at us and gains an awareness that it is possible that if you keep putting in the hard work, applying yourself and have the numbers to back it all up, you can achieve what you set out to.”

I love my iPhone 14 Pro, but not for the reason I expected