Long-time visitors to the Detroit auto show will be disappointed. The glitz and glamor are gone. In 2022 the show is much, much smaller than in the past. Ford, General Motors, and Stallantis are exhibiting, and Toyota has a simple booth. That’s about it: No Volkswagen, BMW, Honda or other industry giants. And that’s great news for startups.

Startups are the main attraction at the reimagined North American International Auto Show (NAIAS). Attendees can’t miss them, unlike in past years when they were literally housed in the basement. Now with most automakers absent, startups are given equal footing among the big three and are found everywhere throughout the main show floor.

The show is different this year. It’s the first auto show since Covid and the first since organizers moved the show from days after CES in January to September — no one enjoys Detroit in the Winter anyway. The show features attractions now, with monster trucks, dinosaurs, and a weekend of DJs and cover bands.

The auto world is changing. Not long ago, this auto show was the premier platform for launching a new vehicle. In 1992 Jeep famously drove the brand new Grand Cherokee from the factory, up the exhibition hall’s stairs, and through a glass window. Chevy introduced several new Corvettes at the show. In 1994 Volkswagen used the show to announce and preview the reimagined VW Bug. The show was always a circus, with dozens of new vehicles announced at various press conferences and more concept cars than one could stomach. This year the only big launch was the new Ford Mustang, and there were only a handful of concept cars.

For 2022 the North American International Auto show featured startups and vehicles mostly from American makers. Most startups are in a dedicated exhibition area next to the TK. Called AutoMobili-D, this is a large portion of the auto show. A quick walk through the site shows why: These companies exhibit more innovations per square foot than the big guys.

“We are thrilled to showcase these important technology advancements in the mobility sector,” Rod Alberts, executive director of the Detroit Auto Show, said to DBusiness. “The entire AutoMobili-D area is sold out, illustrating the key role these companies are playing in the new world of mobility.”

Among the packed area is WiTricity exhibiting its wireless EV charging solution on a Mustang Mach-E. Detroit-based Plug Zen announced it partnered with a local manufacturer to produce its charging stations destined for underserved areas. Stanadyne unveiled a new hydrogen fuel injector at the show. Students from Detroit’s College for Creative Studios (CCS) partnered with Meta to create an auto show in the metaverse. 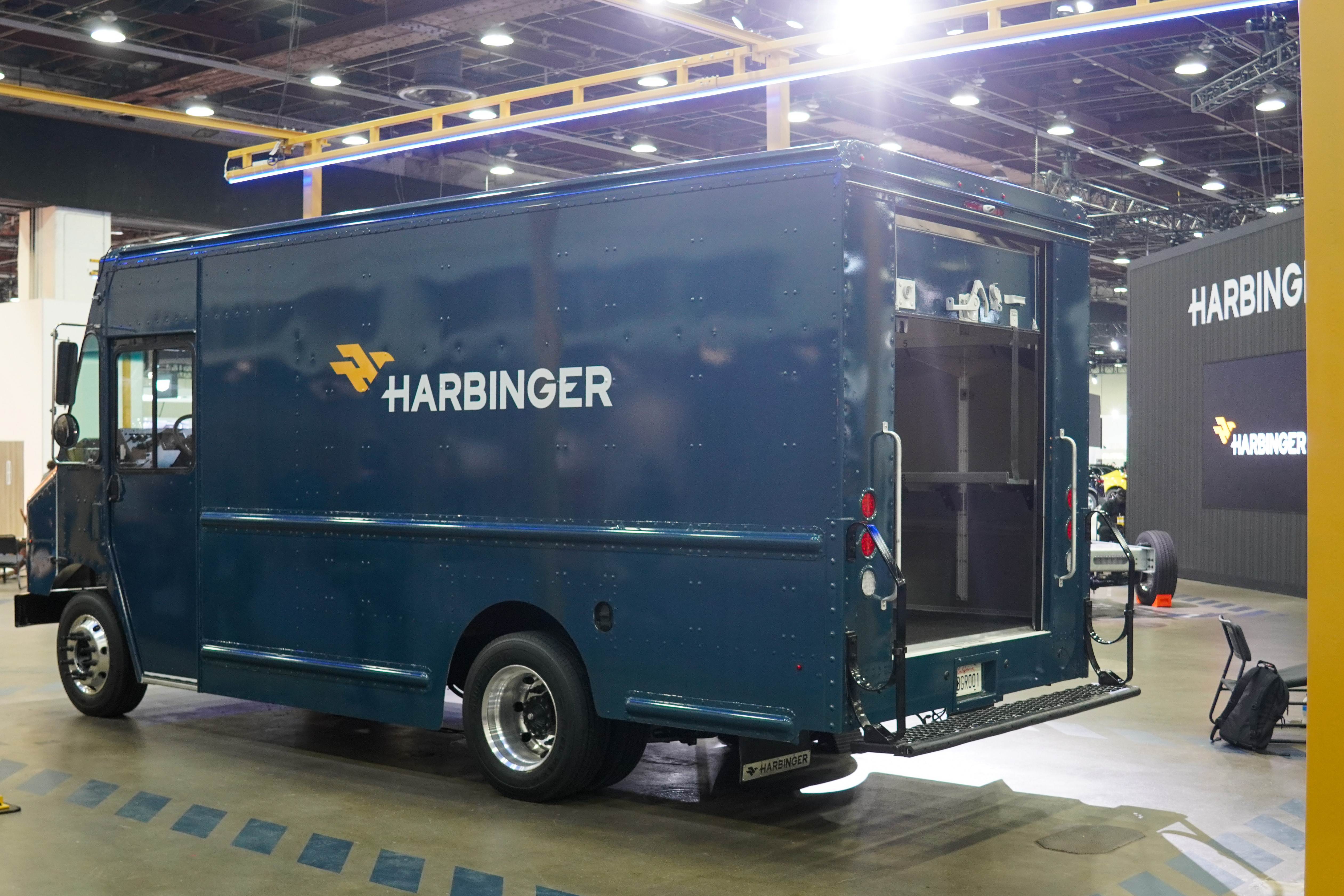 Harbinger was perhaps the most exciting automaker startup at the North American International Auto Show. This week, the company emerged from stealth, aiming to bring a medium-duty EV platform to market. Founded by veterans of QuantumScape and Canoo and financed by Tiger Global, the company says its platform is on track to start mass production by 2024.

The company’s booth was part of the main show floor and stuck out among the sleek Lincolns sitting a few feet away. Harbinger’s chief product is a chassis that fits a panel truck. It’s just four wheels and a frame filled side-to-side with batteries. Think about what’s underneath large walk-in vans, box trucks, and other nondescript commercial applications. Harbinger says the chassis is built to support all the popular medium-duty body types currently on the market.

Philip Weicker, Harbinger’s co-founder, and CMO, tells me the goal is to produce vehicles that are “priced for zero acquisition premium.” The actual MSRP is unclear, but the company feels it can offer its platform at competitive prices.

Other startups are mixed in among the big automakers, mainly eVTOLs. Companies such as ASX, Aerwin Technologies, Gravity Industries, and Icon Aircraft exhibited their wild prototype aircraft, with some companies promising live demonstrations later this week.

Startups would be wise to take advantage of the new trade show reality. As industry giants reduce their presence, startups should fill the void. Big players, like General Motors at this show or Samsung at CES, are increasingly turning to private events to control the messaging and appeal better.

The media and general public still pay attention to trade shows. They’re spectacles and celebrations of industries and progress. And progress rarely starts with the industry leaders but rather the startups exhibiting in the shadows.