A number of consumer advocacy groups have a problem with Walmart’s entry into the metaverse. The online retailer last fall announced the launch of two new virtual worlds on Roblox, Walmart Land and Universe of Play, aimed at engaging the next generation of shoppers. The experiences allow Roblox users to play games featuring toys and popular kids’ characters, earn virtual toys that drop from a blimp, complete challenges, and explore “toy worlds,” among other things. But the groups argue that Walmart is blurring the lines between advertising and organic content and doesn’t properly disclose that the content within these virtual worlds are essentially ads and should be labeled as such.

Walmart, however, disputes these allegations and says it’s in compliance with U.S. children’s privacy laws.

The groups, led by the ad watchdog truthinadvertising.org (TINA.org), sent a letter to the Children’s Advertising Review Unit (CARU), asking them to audit Walmart’s Roblox games.

CARU is a part of the larger nonprofit BBB National Programs, which oversees a dozen industry self-regulation programs in the U.S. In January 2001, CARU’s program became the first Federal Trade Commission (FTC)–approved Safe Harbor under the U.S.’s children’s online privacy law, COPPA. That means participants who adhere to CARU’s guidelines are considered to be in compliance with COPPA, which protects them from any FTC enforcement action.

Simply put, being flagged as being potentially noncompliant with CARU’s program is not something a participant would want to happen, as it could put them on the FTC’s radar.

In the letter, the advocacy groups write to CARU’s senior vice president Dona Fraser to warn the organization about Walmart’s Roblox experience, Universe of Play, alleging that the virtual world targeted toward young children is deceptively marketing Walmart’s goods and services without providing proper disclosures that the game itself, and the content it contains, are actually ads. In addition, the groups note that Walmart is using CARU’s COPPA Safe Harbor Program seal to convey the message that the game is compliant with the organization’s guidelines.

The letter describes various aspects of the Walmart Roblox experience that the groups feel indicate its nature as an “advergame.”

This includes how the game is modeled on Walmart’s toy catalog and its use of popular toys and characters, like L.O.L Surprise!, Jurassic World–branded items, PAW Patrol, Magic Mixie, Razor scooters, and others sold in Walmart stores and online. The game also encourages kids to “collect the hottest toys,” where only in fine print does the game note that “this is an advertisement.” Similarly, as kids walk around the island, they unlock gift boxes where, again, toys are featured, but the message “this is an advertisement” appears in a barely visible font. These gift boxes reveal top sellers in the toys category, like a VTech smartwatch for kids, popular dolls, race cars, and more.

Other inconspicuous ad disclosures appear throughout other parts of the game as well — like signs that the players’ avatars walk by as they collect coins, find toy boxes, or engage in other virtual activities, the letter states. 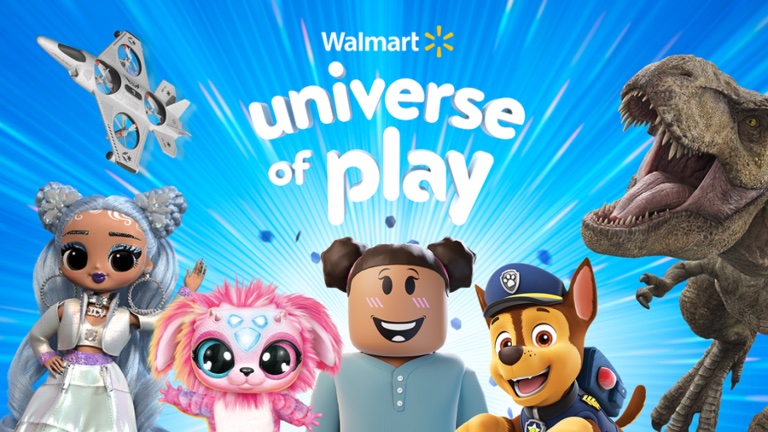 Similarly, the groups take issue with Walmart Land, another Roblox virtual world where kids can play as avatars and where Universe of Play is also marketed.

Both games combined have attracted more than 12 million visits since its launch, the letter states. Both games are also accessible to children of any ages as the “Age Guidelines” for the games on Roblox are labeled as “N/A.” The letter stresses that children under the age of 13 do not “fully understand the persuasive intent” of things like entertainment marketing.

“Walmart’s brazen use of stealth marketing directed at young children who are developmentally unable to recognize the promotional content is not only appalling, it’s deceptive and against truth-in-advertising laws,” said TINA.org’s legal director Laura Smith in a press release. “We urge CARU to take swift action to protect the millions of children being manipulated by Walmart on a daily basis,” she added.

In addition to TINA.org, the groups who signed the letter include Fairplay, the Center for Digital Democracy, and the National Association of Consumer Advocates. They’re asking CARU to audit Walmart’s games for compliance.

However, Walmart, when reached for comment, claims this already took place.

In a statement shared with ProWellTech, the retailer said:

In December 2022, Walmart was approved to join CARU’s COPPA Safe Harbor Program after demonstrating that Universe of Play, a new immersive Roblox experience, complies with the stringent requirements of COPPA and CARU’s Guidelines.

Because of its younger user base, Roblox has already attracted the attention of other companies looking to market to kids, including Sanrio (Hello Kitty) and Mattel, which last year launched a He-Man game on the platform. Mattel also partnered with Forever 21 in 2021 on a Barbie-inspired collection and Kellogg’s debuted “Froot Loops” world.

Outside of kids’ brands, many other companies — like H&M, Spotify, Netflix, Samsung, Chipotle, Nike, Vans, and more — have targeted Roblox’s younger users, too.

To what extent Walmart either does or does not have to make adjustments to its Roblox games could help to set precedent as more brands enter gaming worlds and the metaverse and the ad industry defines its practices for this new form of social networking.