AMD Radeon RX 6500 XT review: Not even worth list price

AMD Radeon RX 6500 XT review: The RX 6500 XT isn’t good. You probably already know that from the dogpile that happened when AMD released the card. RX 6500 XT reviews show performance that’s worse than cards that are several years old, and my review is no different.

But you might still feel tempted. You can actually find RX 6500 XT models at Newegg, Micro Center, and Amazon for around $50 above list price. Amid the GPU shortage, that’s unheard of. Even so, you shouldn’t buy the RX 6500 XT. It’s not in the running for the best graphics cards, and if anything, it’s in the running for one of the worst tech products released so far this year. 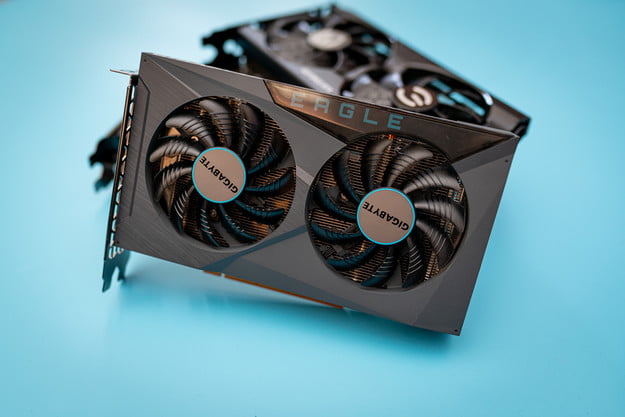 “The AMD RX 6500 XT is a huge disappointment in just about every way.”

Compared to the other budget options from AMD right now, the RX 6500 XT is considerably cut down. It has half of the cores of the RX 6600 XT and half the video memory, though it runs a hair faster with clock speed. The main issues are memory and PCIe bandwidth.

Simply put, 4GB is not enough for gaming in 2022. The RTX 3050 comes with 8GB, and a step up to the RX 6600 will get you that same amount. Worse, the limited memory is squeezed through a microscopic bus, creating a nasty bottleneck that nearly halves the memory bandwidth of the RX 6600 XT.

My testing shows significant bottlenecks due to the PCIe configuration.

For the PCIe interface, I’m just asking: Why? The RX 6500 XT supports PCIe 4.0, but it’s limited to four lanes. The RX 6600 supports eight lanes without any issue, as does the RTX 3050. There’s no reason to limit the RX 6500 XT to four lanes. Most buyers will still be using PCIe 3.0, and my testing shows some significant bottlenecks due to the four-lane configuration.

The RX 6500 XT is beyond disappointing. It’s insulting. Since launch, we’ve learned that it’s a laptop GPU with a cooler strapped on top, and that shows clearly from my results. I could go over the differences and the reasons why the RX 6500 XT is such a poor performer, trying to drum up some value proposition.

But that doesn’t matter. All you need to know is that the RX 6500 XT feels horrible to use.

The performance is rough, occasionally falling behind even the RX 580 (which launched nearly five years ago for the same price). More importantly, the gameplay experience is rough. In Battlefield V, I experienced consistent stuttering when transitioning into gameplay, and on multiple occasions, I saw models visibly stream in after the game had already loaded.

In several cases, I saw flickering issues, too. In Battlefield V, the models would flicker for a few seconds while they loaded in. In Control, the entire screen would flicker between white and black for about 20 seconds before launching. Those suffering from epilepsy have yet another reason to stay away from the RX 6500 XT.

The visual bugs don’t come close to touching the memory issues. My results are in 1080p, but I ran the RX 6500 XT through the spectrum of common resolutions. I wasn’t able to run the 1440p or 4K tests in Red Dead Redemption 2 because the game includes a built-in memory limiter. It’s not the only one, and the RX 6500 XT will run into memory issues in other games.

Assassin’s Creed Valhalla is a prime example of that. At 1080p, the game called for 6GB of video memory, 2GB over what the RX 6500 XT has. Your frame rate in these situations is locked to how quickly the card can fill and flush memory, creating a bottleneck that locks your frame rate in a single spot.

To make matters worse, the PCIe interface limits you. It only occupies four PCIe lanes, while most graphics cards, including the RX 580, occupy the full 16. It’s not a problem on PCIe 4.0, but that’s only available on the most recent AMD and Intel platforms. The vast majority of people will use the RX 6500 XT with PCIe 3.0.

And with even worse performance. Sometimes it’s a few frames, as is the case in Red Dead Redemption 2, and other times, it drops off a cliff (see Assassin’s Creed Valhalla). I didn’t even bother testing the other cards with PCIe 3.0. None of them have an asinine design that inexplicably cuts the bandwidth down to a quarter of what’s available.

It’s no surprise, but the RX 6500 XT is terrible for content creation workloads, consistently falling behind the RTX 3050, and in some cases, even the RX 580. AMD cards aren’t well equipped for 3D rendering compared to Nvidia’s proprietary CUDA and Optix rendering APIs, which stacks on top of the limited performance of the RX 6500 XT.

Then again, there isn’t a graphics card around the same price as the RX 6500 XT that does content creation well. The problem with AMD’s latest release is that it’s considerably worse than even the lowest performer.

The RX 6500 XT is a ray tracing capable GPU, at least according to AMD. Based on my results, that claim is disingenuous at best, and downright inaccurate at worst. Not only does the poor performance of the RX 6500 XT push ray tracing out of reach, some games may not even run with it turned on.

I normally use Cyberpunk 2077 and Control for my ray tracing tests, but that wasn’t possible with the RX 6500 XT. Control, despite running in DirectX 12 mode, blocked off the ray tracing settings. Based on other reviews I’ve seen, I’m not the only one who’s encountered this issue.

Like other RX 6000 cards, the RX 6500 XT falls apart with ray tracing turned on. It’s even more of an issue here than it is with something like the RX 6600, though. Just like in raw rasterized performance, the limited memory interface becomes a severe bottleneck.

I hear you: What about FidelityFX Super Resolution (FSR)? You need an upscaling tool like FSR to get ray tracing working, even on high-end hardware. The problem is that there are only a few games that support both FSR and ray tracing.

I’m not willing to bend over backward to frame the RX 6500 XT as a ray tracing-capable graphics card.

At the time of publication, there are 10 games that support both. For context, Nvidia’s Deep Learning Super Sampling (DLSS) shows up alongside ray tracing in 56 games. The recently announced Radeon Super Resolution (RSR) should provide an upscaling solution for any game, but it’s not available yet.

Is ray tracing possible? Sure, but I’m not willing to bend over backward to frame the RX 6500 XT as a ray tracing-capable graphics card. In reality, if you want to play a game like Cyperpunk 2077 or Guardians of the Galaxy with ray tracing — and let’s be honest, those are more desirable than Godfall and The Medium — you’re out of luck with the RX 6500 XT.

Don’t buy. I could throw talks about PCIe and memory bandwidth, low frame rates, and the subpar gameplay experience against the wall until I’m blue in the face, but that’s not what matters. The best thing I can say about the RX 6500 XT is that you can find one for around $250.

Even then, you shouldn’t buy it.

Are there any alternatives?

Several, all of which are better. The RTX 3050 is the most direct competitor, and it’s far better. You can go back several generations and still get comparable performance, with even the RX 5500 XT coming close to the RX 6500 XT.