Volvo wants to go all-electric by 2030, but so far it’s taking small steps toward that goal.

The C40 Recharge is technically Volvo’s first dedicated electric model, as there won’t be a gasoline version. But the C40 Recharge is closely related to the Volvo XC40, which is available with both gasoline and electric powertrains. It has the same basic platform and powertrain, as well as the same Android-based infotainment system. It even looks mostly the same as the XC40, with the main difference being a sleeker silhouette.

That stylistic flourish comes at quite a cost. The 2022 Volvo C40 Recharge starts at $59,845 — $7,050 higher than its electric XC40 Recharge sibling. That’s partly because, while the 2022 XC40 Recharge is expected to be offered in both Plus and Ultimate trim levels, the C40 Recharge is only available in the higher-level Ultimate spec. Both Volvos qualify for the $7,500 federal EV tax credit, and may qualify for additional state or local incentives, depending on where you live. 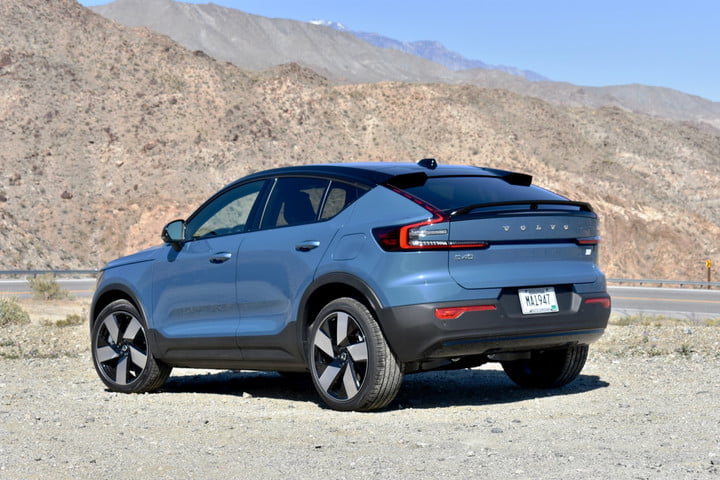 It’s not often that Volvo builds a car purely as a fashion statement, but that is the case with the C40 Recharge. Designers basically took an XC40 Recharge and chopped the roof down, giving the C40 a less-boxy profile similar to “SUV coupes” like the BMW X4 that puts it more in line with other electric SUVs like the Volkswagen ID.4, Kia EV6, Ford Mustang Mach-E, and Tesla Model Y. However, none of those EVs can match the C40’s dramatically swept taillights, which flank a functional rear spoiler. The two bumps at the top of the roof provide real aerodynamic functionality as well, Volvo claims.

Other small differences, including a new front bumper and headlights, distinguish the C40 Recharge from the XC40 Recharge for now, but the XC40 is expected to get those same tweaks as part of an upcoming face-lift.

The interior design has the same simple yet stylish look we’ve come to expect from Volvo.

We expected the C40 Recharge’s curved roof to affect passenger space, but rear seat headroom is fairly close to that of the XC40 Recharge, which isn’t the most spacious EV around. However, the C40 Recharge has less cargo space than its sibling, as well as a smaller frunk. That’s not good, as the XC40 Recharge already lagged behind on cargo room compared to other similarly sized EVs.

Another big difference between the XC40 and C40 interiors is the latter’s use of sustainable materials. Unlike the XC40, you can only order the C40 with a leather-free interior. The upholstery is a mix of suede and a material called Microtech — both made from recycled PET plastic, the kind used in soda bottles. Those same discarded bottles are also the raw material for the carpets and dashboard trim, which has a cool topographical map pattern. The overall design has the same simple yet stylish look we’ve come to expect from Volvo. Who said sustainability and style can’t mix? 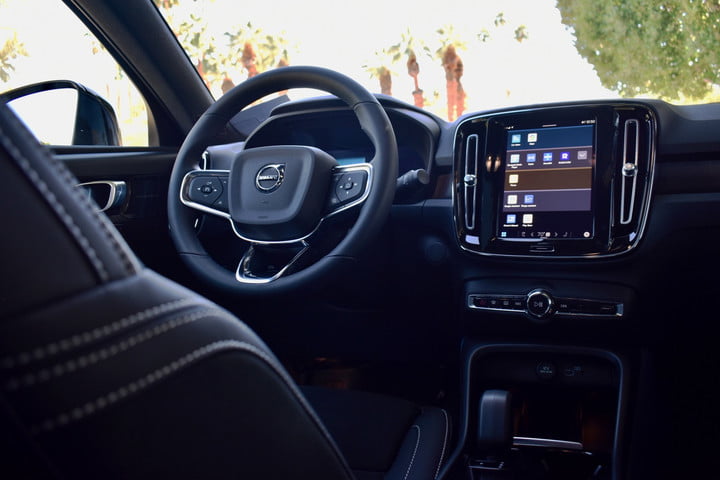 Like the XC40 Recharge, the C40 Recharge gets a 9.0-inch touchscreen and 12.3-inch digital instrument cluster with the same Android Automotive OS infotainment system rolling out across the rest of Volvo’s lineup. It includes built-in Google Maps, Google Assistant, and Google Play Store connectivity, and Android users can sync their personal profiles to the car, providing more integration than basic Android Auto.

While it is Android-based, the infotainment system does support conventional Bluetooth pairing. Wi-Fi connectivity is available as well, but only through a separate Volvo Cars app. Volvo also said it will add Apple CarPlay connectivity via an over-the-air update by mid-2022.

We liked the layout of both the touchscreen, which can switch between a smartphone-like array of icons and a neat four-tile menu display, and the digital instrument cluster, which can display maps or dial back extraneous information in its Calm mode. The center-console tray housing a USB-C port, 12-volt outlet, and wireless charging pad was also very space efficient.

The touchscreen can switch between a smartphone-like array of icons and a neat four-tile menu display.

On the negative side, the Volvo’s touchscreen doesn’t look very impressive compared to the massive screens you can get today in some EVs from mainstream brands, such as the Ford Mustang Mach-E. It also seems like every time we get in a new Volvo, there are fewer physical controls. While that contributes to the elegant interior design, it also means digging into the screen menus or triggering a pop-up window to access certain functions, which isn’t very elegant. And while Google Assistant’s voice recognition is excellent, you can’t use it to switch SiriusXM satellite radio channels. 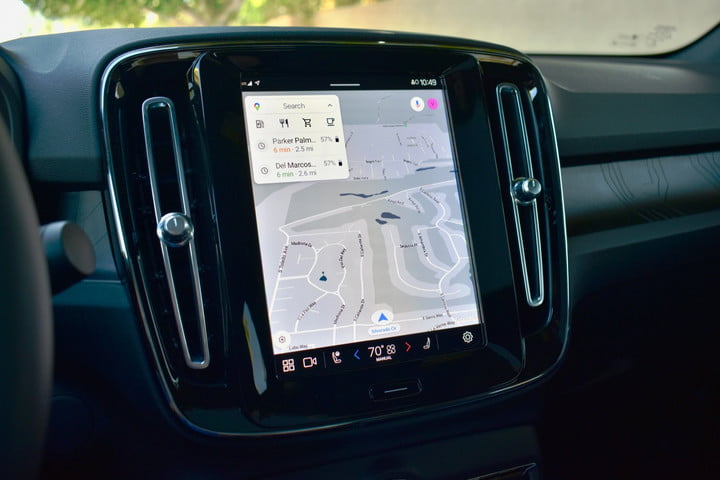 The C40 Recharge shares Volvo’s CMA (Compact Modular Architecture) platform with electric and gasoline versions of the XC40, as well as the Polestar 2 from Volvo’s spinoff brand. The powertrain carries over as well.

Our only issue was limited rear visibility through the tiny back window.

The C40 Recharge drove very similar to the XC40 Recharge, meaning it felt comfortable and refined, but not particularly sporty. Of the three CMA EVs, the Polestar 2 is supposed to be the driver’s car, after all. We were happy to sacrifice extreme cornering grip for the C40’s smooth ride, quiet cabin, and ability to make bumps disappear. Volvo also included a one-pedal driving mode, so you can recuperate maximum energy when decelerating (we recovered an indicated 2% charge while descending a steep hill). The only issue was limited rear visibility through the tiny back window — not a problem you’ll have in the XC40 Recharge. 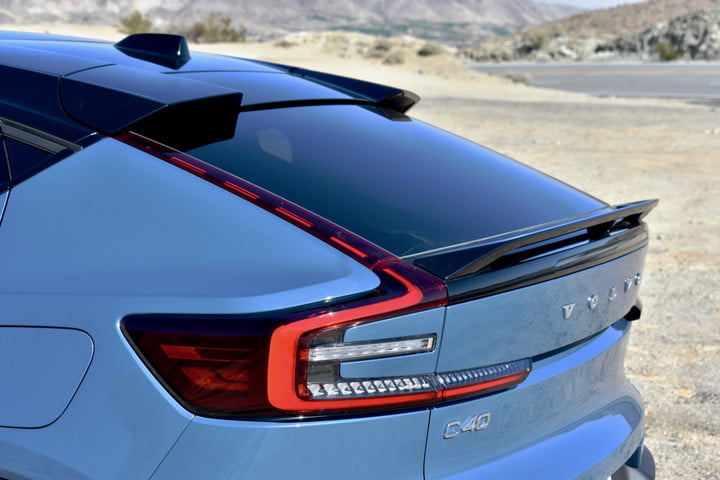 However, despite being somewhat sportier, the dual-motor Polestar 2 is rated at 249 miles of range and 89 MPGe combined (94 MPGe city, 84 MPGe highway). An available single-motor version of the Polestar 2 sacrifices all-wheel drive and some power, but pushes range to 270 miles (a single-motor C40 has been announced for Europe but not the United States). It’s also worth noting that the base Tesla Model Y Long Range is rated at 318 miles, and the Ford Mustang Mach-E, Hyundai Ioniq 5, and Kia EV6 will all top 300 miles in certain configurations.

The C40 Recharge can, err, recharge at 11 kilowatts when plugged into a 240-volt Level 2 AC charging station, allowing for a full charge in eight hours, according to Volvo. The C40’s 150-kW peak rate for DC fast charging is competitive with other EVs, but the quoted 40 minutes for a zero to 80% charge is less impressive.

How DT would configure this car

Volvo makes buying a C40 Recharge simple. It comes in one all-inclusive trim level, so the only thing customers have to choose is the color. We were quite smitten by our test car’s Fjord Blue, but Volvo also offers Black Stone, Fusion Red, Thunder Gray, Silver Dawn, Crystal White, and Sage Green. 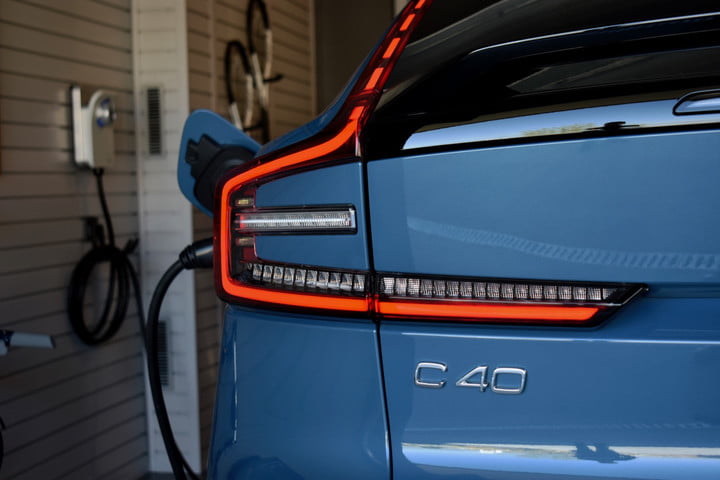 The C40 Recharge is a nice car, but it needs to be more than that to truly make an impact. It may be Volvo’s first mass-produced car without a gasoline engine, but it’s still based on an existing model — the XC40 Recharge.

Both Volvo EVs also face stiff competition. The Ford Mustang Mach-E, Hyundai Ioniq 5, and Kia EV6 are all 300-mile EVs with impressive tech and driving dynamics. While the Volvo brand may have more inherent prestige, these EVs don’t exactly feel low-rent, either. Strip the badges off, and we doubt most people could tell which ones were from a premium brand and which ones weren’t.

Volvo’s traditional rivals are also launching their own small electric SUVs. The Mercedes-Benz EQB-Class, Genesis GV60, and Audi Q4 E-Tron (which gets its own C40-like Sportback variant) should give Volvo a run for its money. Despite a range deficiency, the C40 Recharge does at least look like a decent value compared to the Tesla Model Y, as recent price increases have pushed the Tesla’s base price to over $60,000.

Since the XC40 Recharge debuted in late 2020, the EV market has expanded and grown more competitive. Volvo’s next step needed to be bigger than a restyled version of the XC40, but that’s what we got. We eagerly await Volvo’s next-generation EVs, but for now the C40 Recharge doesn’t stand out.

Should you get one?

No. Unless you’re really smitten with its styling, there isn’t much to recommend the C40 Recharge over its XC40 Recharge sibling.

Elon Musk doubles down on support for this Twitter feature