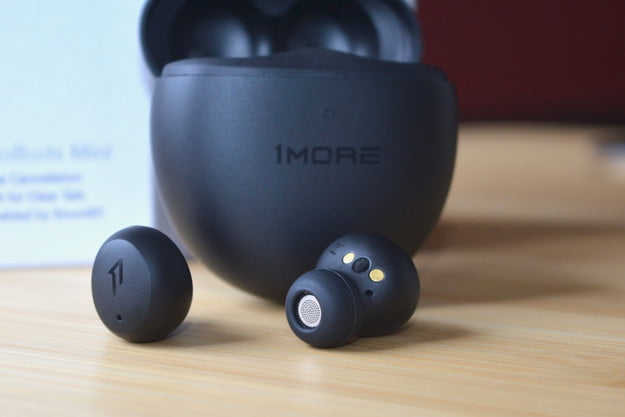 “Light and comfy, in the ComfoBuds Mini are held back by a lack of sound clarity.”

Is smaller necessarily better? Smartphone and laptop makers certainly seem to think so, as they constantly battle to make the thinnest, lightest devices. I’d argue that bigger batteries and better screens would improve those devices more than shaving a few millimeters, but if you’re someone with small ears, size matters. And yes, smaller is probably better — at least when it comes to wireless earbuds.

And 1More’s new $100 ComfoBuds Mini are indeed small. So small, in fact, that 1More claims they’re the smallest noise-canceling earbuds in the world. The question is, did 1More — in its quest to produce mouse-sized earbuds — make too many sacrifices in other areas? Let’s check ’em out.

The ComfoBuds Mini, which are available in black or sand colors, come nestled in an egglike charging case with a flip-top lid and satin finish. Unlike the similar-looking case on the competing Google Pixel Buds A-Series, this one supports wireless charging. It’s also smaller, lighter, and easily pocketable.

You’d expect a small size to translate into a very comfortable earbud, and that’s exactly what you get.

The lid snaps open and closed with a satisfying precision, and no wiggle or floppiness whatsoever. Magnets hold the earbuds in their sockets with just the right strength: They’re strong enough to pull the earbuds in securely, but not so strong that they make it hard to remove the tiny buds when you need them.

The earbuds themselves are remarkably small, and finished in a slightly less slippery version of the case plastic. But you’ll have to take care while handling them — they’re so small, they’re easy to fumble and drop. And 1More has given them IPX5 protection from water, which means workouts or even the occasional rinse under water shouldn’t cause them any harm.

You’d expect a small size to translate into a very comfortable earbud, and that’s exactly what you get with the ComfoBuds Mini. If you don’t like the feeling of closed designs that seal your ear canal with a silicone tip, these don’t magically make that sensation of having a blocked ear go away. But as closed earbuds go, they’re extremely comfortable. I was able to wear them for hours with no problems at all.

The ComfoBuds Mini are easy to pair with both iOS and Android devices, and it’s a strong, reliable connection.

One way that 1More has achieved such a small size is by reducing the clearance between the edge of the silicone tips and the speaker openings they encircle. It effectively eliminates the small squishy zone at the end of the eartips. It didn’t bother me at all, but my daughter noticed it, saying that she could feel the harder edge it created. Four sizes of silicone eartips are included, which should make it easier to get that perfect fit.

Like most of 1More’s products, the ComfoBuds Mini use touch controls. They’re easy to tap because they occupy almost the entire outer surface of the earbud. Unfortunately, 1More doesn’t give you a lot of choice when it comes to what those controls do. Only three gestures are supported: Double taps, triple taps, and long presses. Of these, only the taps can be customized in the 1More Music app, and only from a preset list of options: Play/pause, volume up/down, track skip forward/back, or voice assistant access. Only two can be active at once. The long press is reserved for switching between active noise cancellation (ANC) modes and can’t be changed at all. Calls can be accepted or ended with a double-tap, but there’s no way to reject an incoming call unless you grab your phone.

The result is sound that isn’t bad per se, but it lacks clarity.

Configurable wear sensors mean you can choose if buds autopause your music when you remove an earbud, and whether you want playback to resume when put them back in. Or you can shut off the feature completely. The playback resume feature works nearly instantly, but the autopause takes about two seconds to activate.

There’s no Google Fast Pair, but the ComfoBuds Mini are easy to pair with both iOS and Android devices. It’s a strong, reliable connection: I was able to put three stories between the earbuds and my iPhone 11, which is more than I can say for many other wireless earbuds I’ve reviewed. It would have been great if 1More had included Bluetooth Multipoint for simultaneous device connections, but that feature is still a rarity in wireless earbuds and essentially unheard of at prices of $100 or less.

While the wireless connection between the buds and the phone is excellent, I can’t say the same for the 1More Music app, which routinely experienced problems connecting to the ComfoBuds Mini.

Considering their diminutive size, the ComfoBuds Mini produce an impressive amount of bass. They’re on par with some of the bassiest buds you can get, like the Jabra Elite 75t. They also have a generous soundstage and very good stereo separation, both of which help to create depth and immersion. But unlike the Jabras, their low-end power isn’t balanced with an equally detailed midrange or high frequency response. The result is sound that isn’t bad per se, but it lacks clarity, particularly in the upper registers where vocals usually live.

If you simply want to drive your workouts with the thumping rhythms of your favorite rap, hip-hop, or EDM tracks, I suspect you’ll be able to overlook (or simply get used to) this imbalance in the EQ. But if you’re a fan of classical, K-pop, rock, or singer-songwriter/folk fare, you may wonder why voices seem to lack their usual energy or detail.

Transparency mode is excellent for its price range.

I also noticed that turning ANC on actually increases this disparity, further boosting the low-end. Turning off ANC and transparency produced the best sound quality.

With many wireless earbuds, an EQ option in the companion app lets you tweak your way to a sound signature that better suits your tastes, but 1More doesn’t offer this feature. Instead, it relies on SonarWorks’ SoundID system — an algorithm that attempts to adjust a headphone’s EQ based on your personal hearing profile. My experience with SoundID on other devices has been hit-and-miss. On 1More’s ColorBuds 2, I found it improved the default tuning, but I can’t say the same for the ComfoBuds Mini. When applied, my hearing profile robbed the sound signature of much of its low-end punch, while doing nothing for the mids and highs. Your mileage may vary.

Within the 1More Music app, you can select from three ANC modes: Strong, mild, and wind-noise reduction. Strong provides the greatest external noise cancellation, but it’s only moderately effective in dealing with droning, multi-frequency sounds like fans or restaurant chatter. It also introduces a noticeable amount of hiss when your environment isn’t super loud, so you’ll need to switch to the less aggressive mild mode to block day-to-day office and household sounds.

In fact, I heard so little difference between strong and mild in terms of cancellation, I ended up staying with the mild mode. Unfortunately, during my time with the ComofBuds Mini, conditions weren’t breezy enough to test the wind-noise reduction mode.

Transparency mode, however, is very good. It’s not quite as invisible as you’d get with Apple’s AirPods Pro, but considering the Minis cost less than half as much, it’s excellent for its price range.

Also included in the ComfoBuds Mini is some fancy artificial intelligence tech that lets them adapt to your voice in order to make calls clearer. Maybe I just didn’t spend enough time on calls for the A.I. to reach its full potential, but when using the earbuds outside, I found that my voice sounded muffled — like I was talking through a layer of gauze.

Still, the mics did an excellent job of neutralizing competing loud sounds in my environment. I recorded five minutes of talking while walking down a very busy street and you’d never have known it if you had been on the other end of the call.

Unfortunately, if you want to hear your own voice or surroundings more clearly while talking, you’ll need to engage transparency mode before placing or accepting a call — there’s no way to switch modes once the call begins. As long as you do that, your calls will feel very natural. You can use either earbud independently for calls and music.

You can expect five hours of playing time per charge in each earbud when ANC is turned on, according to 1More, and 20 hours total when you include the case. That bumps up to six and 24 hours respectively when you disable ANC. Those numbers look pretty accurate — at 50% volume, I was able to play music for over two hours straight with ANC off, and the ComfoBuds Mini still had more than 80% battery life left.

Should you run low on juice, a quick charge feature extends your playing time by 80 minutes if you dock the earbuds in their case for just 10 minutes.

Though not perfect, the 1More ComfoBuds Mini are a well-featured and affordable choice for those who want a set of noise-canceling earbuds, but have had trouble getting a comfortable fit from larger models.

If you’re purely looking for the smallest possible earbuds, we can recommend two alternatives — though neither offer noise cancellation:

On the other hand, if the ComfoBuds Mini’s size isn’t as big a draw, the Earfun Air Pro 2 are the same price, with similar features and better sound and ANC.

How long will they last?

The ComfoBuds Mini appear to be built well and their IPX5 rating should keep them safe from most types of water exposure. As with all wireless earbuds, you can expect battery capacity to drop over time. They are backed with a standard one-year warranty.

Should you buy them?

If you have small, hard-to-fit ears or simply want the smallest possible earbuds, then yes, they’re a solid pick.

Everyone is drafting their own startup Black Swan memo – ProWellTech